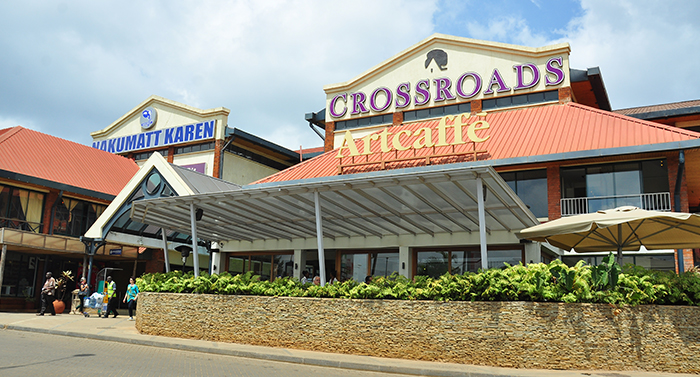 A journalist friend once gave me a very good tip if ever I wanted to write another column.

It’s a clever idea, isn’t it? ‘Meanwhile’ – it must be the most common linking word in journalist’s toolkit.

You know how it goes:

“……. and so, with a string of five goals, Côte d’Ivoire moved effortlessly into the semi-finals of the Africa Cup of Nations.

Meanwhile, back in England, Arsenal returned to the top of the Premier League as Manchester United dropped two points at Tottenham.’

And it’s a word I want to use now. For the last four weeks it has not felt possible or proper to write about anything other than the eruptions of violence that have been going on around us. But perhaps now is the time for a ‘Meanwhile’ diversion:

Meanwhile, it was coming up to lunchtime on Sunday – they day we often go out for a family meal. Someone had told us that there is a very good Indian restaurant upstairs in the Crossroads shopping mall at Karen. So that’s where we went.

Do you know the place? Well, if you’ve been to Karen over this last year or so, you couldn’t have missed it. It stands square and fairly tall on the Langata Road and just before the roundabout of what we used to call ‘Karen dukas’.

Some duka, the Crossroads mall. There is a Nakumatt at the heart of it. Like all the other Nakumatts that have sprung up around the city. What’s their slogan? ‘You need it – We’ve got it!’ I suppose if you are one of the growing but now very nervous middle class of Kenya, then you could say that the Nakumatts stock the sorts of things you need.

But many of the smaller shops that cluster round the Karen Nakumatt – what they offer are more likely to be things you want rather than need. The name of the hairdresser is indicative – ‘Top of the World’. ‘Little Red’, the ‘unmistakable’ one, has taken a shop there, as have a number of other up-market clothes shops. There are tasteful interior designers. There are sellers of luxury items from ancient-style Persian carpets to the latest laptop computers.

On the ground floor, Dormans have set up a coffee café, opposite a restaurant serving Mexican dishes. These are both busy places, right in the middle of things. Good for a quick snack or an animated chat. But we were making upstairs for a more restful and relaxed place. The Indian restaurant. We discovered it is called ‘Open House’.

I first knew the Open House when it really was just that – an open space in a stair well of a small shopping block along Mpaka Road in Westlands. The ambiance was a nothing – so the fact that so many people chose to eat there meant that the food must have been very good. It was. Then the Open House moved to Centro House, also in Westlands – and now there is this second one in Karen.

The food is still very good. The three of us shared a tasty variety of Tandoori Chicken, Vegetable Makhanwala (‘garden fresh and seasonable vegetables prepared according to our chef’s secret recipe’), Dal Tadka (mixed yellow lentils), and Pilhao Rice. The spelling of the last dish suggests a Goan influence in the cuisine.

As my son and I differed over whether the spicing would be ‘medium’ or ‘hot’, the waiter, with an amused smile, offered the compromise of ‘medium plus’.

The decor is interesting, too – authentic Indian, with fretted wooden screens and rich fabrics.

Looking down on the busy car park and the throngs of Kenyan mid-day Sunday shoppers – young men and women in their smart casuals – it was a reminder of how Kenya’s economy has grown over the last twenty years or so. Twenty years back, Karen dukas was mainly a watering and refuelling place for KCs and expats.

And then my son said: ‘Look, Dad – Look!’ A bright yellow Hummer was going passed along the Langata Road. A reminder that, meanwhile, outside these islands of affluence, Kenya is still at another kind of crossroads.