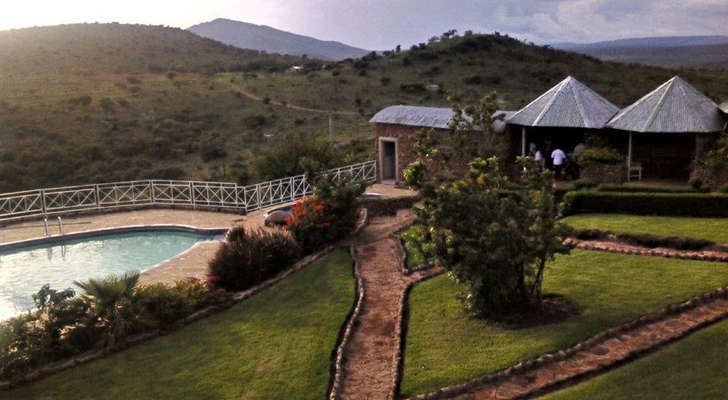 Where I come from – the eastern marshes of rain sodden England – if it was wet and cold then no way could you escape from it. But one of the pleasures of living in Nairobi and having a car is that if the sky is grey and the air is chill then, within less than an hour, you can drive down the Magadi Road, cross the western shoulder of the Ngong Hills, turn Corner Baridi, and find another world and the sunshine down in the Rift.

If you want to make a real outing of it, you can enjoy what must be one of the best nyama choma places for many miles around Nairobi – the Olepolos Country Club. Now I’m by no means an expert when it comes to nyama choma, but I can only tell you that the meat is sweet and tender – and the chips are hot and crisp.

It was last Sunday. I was really glad to be able to wind down the car window, and feel some fresh air on my face. And, once beyond the Ngong Hills, the view is magnificent. Nothing soft about it. Rugged hills. Gaunt thorn trees. Reddish soil. Castled ant hills. Masai cattle. The occasional walker. Very few cars.

The Olepolos Country Club is perched on a hillside. The turning off the tarmac is marked by the sign of a huge sun-dried bone of a cow. The stony track leads up past the low huts of a manyatta, past some animals sculptured in metal, past a children’s playground, and into a car-park where, if you are early enough, you can find the partial shade of an acacia.

The shaded sitting and eating areas are well scattered down the slope – some of them with a superb view of the near peaks of Endoinyo Narok and Oloolkisailie, west across to the Nguruman Escarpment, and south to plains of distant LakeMagadi.

The Club lives up to its name; it is very much a friendly and a family place. I was soon greeted by the two brother Directors, Lesinko and Professor Chege Waruingi, who is Chairman of the Capital Markets Authority and also a Director of Magadi Soda – that goes back to 1910, as one of the first companies to be registered in Kenya.

And the names of the two brothers will tell you that, in relation to running such a business in such a place, they have the advantage that their parents are a mix of Masai and Kikuyu.

It was good to talk with them after what must be getting on for three years. They showed me how the sitting areas have expanded.

‘This is not like restaurants and bars in Nairobi,’ Professor Chege said, ‘where people tend to bunch together. Here though, yes, it is a friendly place – but couples and groups tend to value their privacy. So people like these clusters that are well spread out. Some overlooking the valley; some in the shade of trees.’

Clearly, the Club is doing well. Not long after mid-day most of the clusters were occupied – and so were the waiters, taking orders for the meat and crossing the slopes with the drinks. The day before – on the Saturday – the Club had entertained an interesting mix of groups, including the School of Dentistry, teachers from Limuru Girls, and the Nation Media Group. He hadn’t kept count, but Lesinko told us that more than twenty goats have been slaughtered that day.

By the way, for normal business, the Club opens only at weekends. But for groups who want a brainstorming meeting in the bush, a team building experience or such like, then it will open for them during the week.

The Club is well patronized, then, by families and groups driving out from Nairobi. It is also very well appreciated by the local community. It employs over 70 people from just around the place. It buys their goats. It supports primary schools. And it is even sponsoring adult literacy classes with an enrolment of over 80 women and men.

‘Olepolos’ means ‘the place between’. For the Club, it is a very appropriate name.