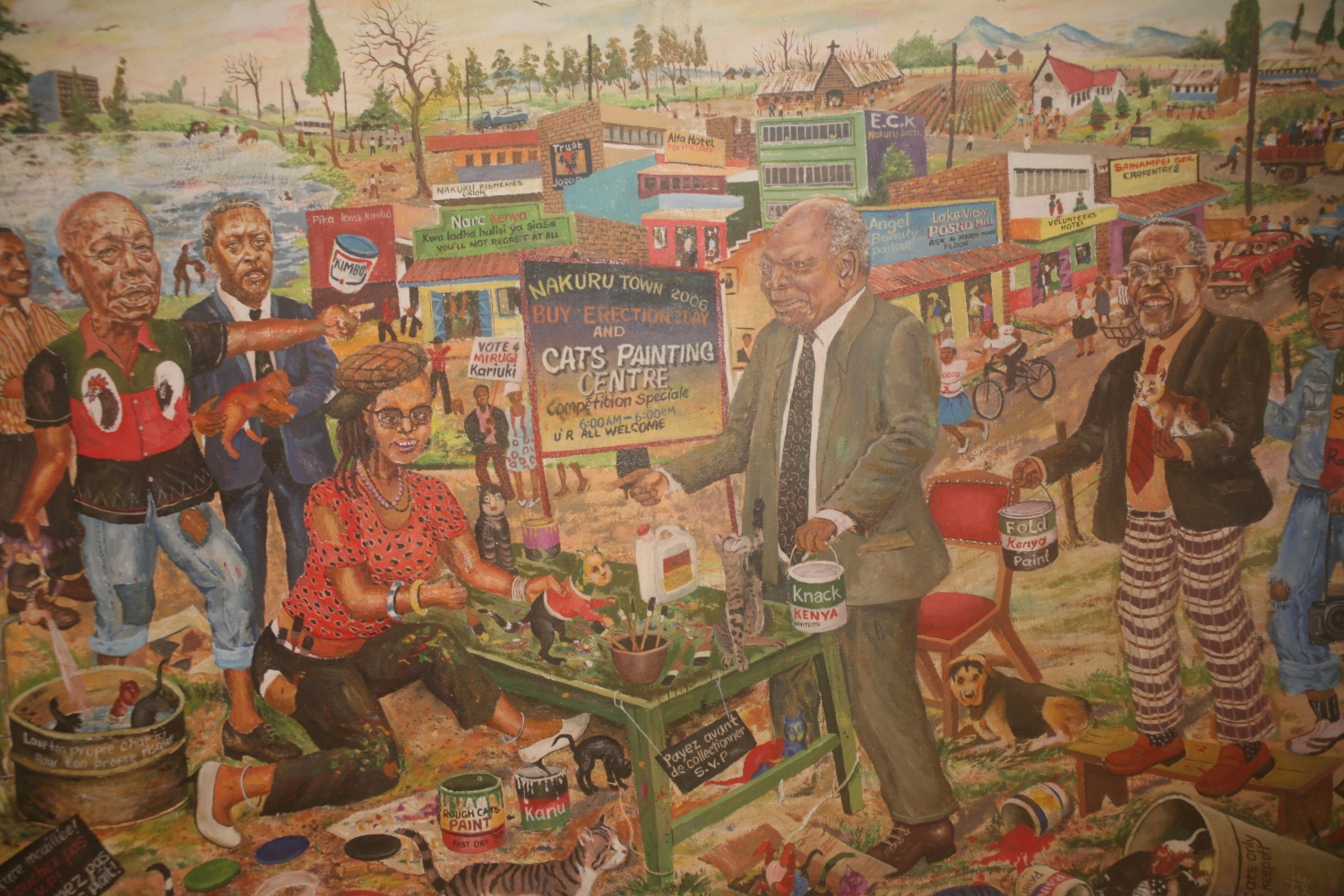 It must have been six years ago that I bought the painting from Allan Gathuka. It is still my favourite. Nairobi from the perspective of a slum. A young couple stand in the foreground. Both have a wistful look about them. As if wondering how they can get out and move on. Behind them, people are walking through the narrow lanes between the shacks. Children are playing in the dust. A dog spectates. A man’s bicycle is propped against a wall. Cars are passing along the distant road. And beyond is the skyline of the city’s business centre.

Last Tuesday morning I went to RaMoma to meet Allan again. He is having an exhibition there, and I wanted the chance to chat with him before the next day’s official opening. I was going to ask him how his work has been affected by the violence that blighted the end of last year and the beginning this one.

I didn’t need to ask. The answer was there in the first painting I saw at the entrance to the gallery. The canvas is crammed with people. They surround a black ballot box. Yes, it is the election. A man is haranguing, as if ‘You go and vote against our candidate and we’ll chop you.’ Behind him, another young man is wielding a panga.

In the background, a house is burning. Women stand and watch, with twisted faces. A man is running, carrying some loot above his head.

It is a vision of chaos. Distorted bodies. Wild gesticulations. Something like the grotesque paintings of Hell, done by the Dutch artist, Hieronymus Bosch, in the Middle Ages.

‘I wanted to show the insanity,’ Allan said.

‘Your style has really changed,’ I said.

He walked me to the end of the gallery, where there were four or five canvases of a kind I remember – clusters of brown shacks, angular against the pale soil; the deep greens of the hillsides of his birthplace, Ngecha, near Limuru.

I still like them. But I was drawn back to the paintings of faces.

‘You seem to have developed a fascination for faces,’ I said.

‘Yes, faces show what people are feeling. I like to show the changes of mood.’

In his paintings about what followed the election, there are surprised faces, apprehensive faces, in the picture he calls ‘Spreading the rumours’. Then there are the resigned faces of the people in the refugee camp, without possessions and without hope.

And then there are paintings of a third style – a much more surreal style of people with tapered bodies, as if floating above the ground. One of the most powerful of this set shows a naked woman leading a demon figure by the hand into a confusion of garish colours.

‘There is something devilish that can happen when you imitate a foreign culture,’ Allan said.

When you read this, the exhibition will have been open for five days. But it goes on until 4 September. It runs alongside two other exhibitions – of works by Ancent Soi and Mbuthia Maina.

And if you haven’t yet been to RaMoMa – the Museum of Modern Art – in its new site along the 2nd Parklands Avenue, then it’s well worth a visit just to see the place. It is a pleasantly rambling building, with light and airy galleries, some intriguing nooks, a garden of sculptures, a shop selling an enticing variety of things – from books to cards and dresses made out of parachute silk – and a Dormans coffee bar.

It is now open seven days a week, from 9.30 am to 5.30 pm. Which means it is open today – so you still have time for a walk round the galleries and a coffee in the garden.