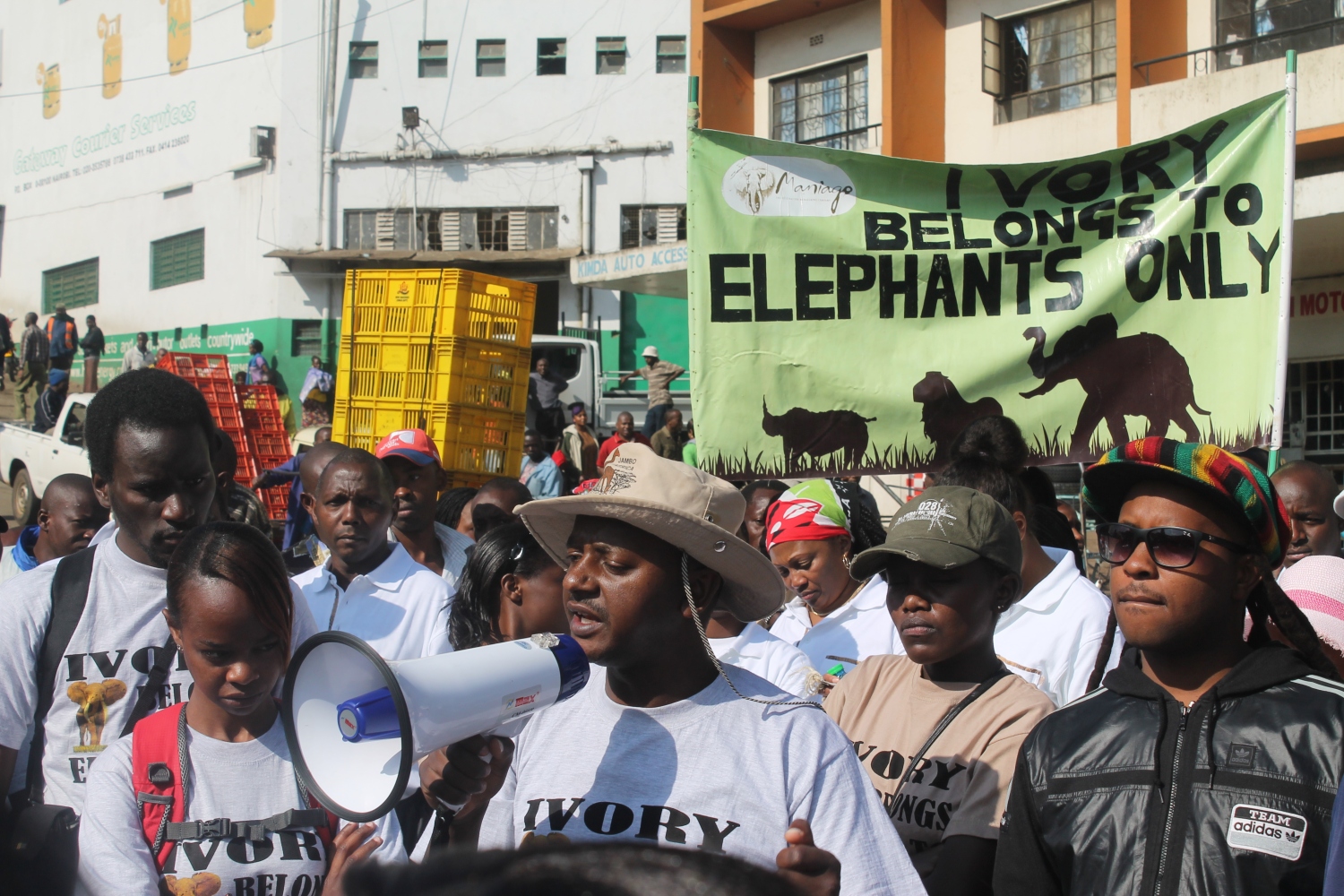 There are many ways to raise awareness. An old school friend of mine, for example, cycled 6282 kilometres from New York to San Francisco to raise funds for the charity Research Autism. My brother spent a week trekking through the Drakensburg Mountains in South Africa to support the region’s anti-rhino poaching effort. All it requires is an unusual or extraordinary act for a noble cause. Though Jim Justus Nyamu’s act may at first seem fairly ordinary, he is undoubtedly an extraordinary man. And all he does, is walk.

Earlier this year Jim walked from Mombasa to Nairobi, and subsequently from the Masai Mara through Nakuru, Samburu, Nanyuki, Laikipia, Pokot, Meru, and Nyeri – before finally arriving in Nairobi on the 29th of June. His 1,710 km journey formed the basis of the newly established ‘Ivory Belongs to Elephants’ Campaign.

As Jim walked from the coast, and rounded Mount Kenya, he stopped off at various communities and spoke about the value of wildlife, with a particular emphasis on the conservation of elephants. His route through Tsavo and the wildlife rich territory surrounding Mount Kenya engaged communities adjacent to some of the country’s most vulnerable national parks. Members of such communities are often approached by highly organised criminal syndicates and offered measly sums of money to kill elephants for their ivory and rhinos for their horns.

I met Jim recently at the Ivory Belongs to Elephants Walk which snaked through the Nairobi City centre, Eastleigh and Pangani, culminating in a ceremony at the National Museum’s amphitheatre. For three hours cries of ‘Ndovu wetu!’ and ‘Our animals, our heritage!’ echoed through the streets as volunteers walked alongside Jim and a handful of KWS officers. At one point I managed to squeeze through the 100-strong crowd to join Jim at the front for a chat. I asked what inspired him to walk for the elephants.

‘I came up with the idea years ago, when I was still at university’, he said. ‘Since then I have worked for the Kenya Wildlife Service as a research scientist – which involved taking stock of elephant numbers all over the country. I could see first-hand what was happening to our elephants and, one day, I decided something needed to be done. That’s when I came up with the idea of walking from Mombasa to Nairobi – and I have been an activist since.’

In January 2012 Jim co-founded the Elephant Neighbours Centre (ENC) – a grassroots research organisation focused on enhancing the capacity of communities living with wildlife to reduce human-wildlife conflict, and to appreciate the economic value of protecting the animals – appreciating it above involvement in the illicit wildlife trade. The focus is understandably on communities adjacent to Kenya’s national parks, so why campaign in Nairobi? The persistent calls of ‘Hakuna ndovu hapa’ by onlookers in Eastleigh seemed to beg the same question. So Jim told me why.

‘Although members of local communities near wildlife rich areas are responsible for the poaching, they are usually approached by people from criminal networks based here in Nairobi. They offer the villagers a few thousand shillings, collect the ivory, and sell it off for millions to buyers from Asia. People talk about cutting off the supply, or curbing the demand, and in both approaches education is paramount. This walk brings the message from upcountry to Nairobi.’

One of such criminal organisations, I was later informed, is called Big Horn, and is based in the heart of Eastleigh. At busy junctions throughout the walk, including one in Eastleigh, Jim stopped off, got out his loudspeaker, and encouraged those that gathered to stop making excuses for their unemployment and to join the KWS. ‘Kenya needs more naturalists’, he repeated.

Jim reiterated his points at the ceremony held at the National Museum. He was joined by a number of speakers, including the Managing Director of Serena Hotels Africa, Mahmud Jan Mohamed, Dr Manu Chandaria – the Director of the International Fund for Animal Welfare (IFAW) – as well as a number of representatives from both the KWS and the Museum.

They all echoed Jim’s enthusiasm for the cause, including Dr Chandaria who emphasised the importance of engaging local communities adjacent to Kenya’s national parks. IFAW, he said, has already convinced 1800 people from communities neighbouring Amboseli to allow a corridor for elephants to roam to Tsavo and beyond.

Next month Jim plans to walk further afield. His US tour will see him walk 720 kilometres along the east coast of North America from Boston to Washington DC. He plans to coincide his arrival in Washington with the David Sheldrick Wildlife Trust’s international iWorry March for Elephants on the 4th of October. The American market for ivory is often overlooked, and he plans to change that.

But he’s not stopping there. When he returns, he plans to walk across East Africa from Kampala to Dar es Salaam. And next year he’ll take his campaign to the streets of Asia.

‘I will keep walking until the world knows that ivory belongs to elephants’, he said.