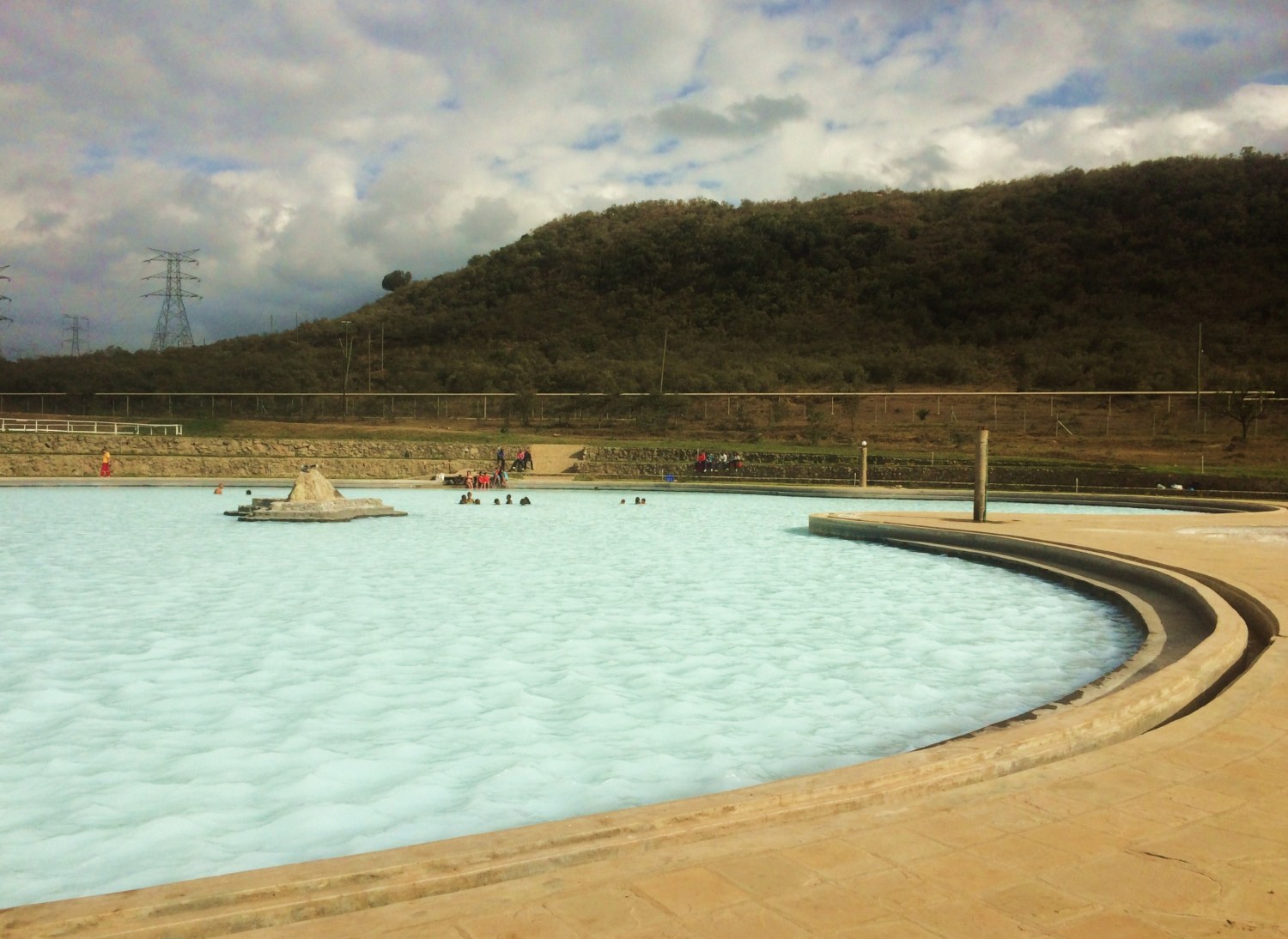 ‘Welcome to Hell!’ – was the familiar phrase that greeted us as we drove through the Elsa Gate to the Hell’s Gate National Park. I was in Naivasha for the weekend, camping at Carnelley’s with a large group of friends, and couldn’t resist a quick visit to the park’s newest attraction – the Olkaria Geothermal Spa. That’s right; the gate to Hell now has a spa.

I’ve always had quite a negative opinion of the Olkaria power plant – viewing it solely from a conservation standpoint, having watched the factory eat its way slowly into what’s left of the national park. It is now host to a limited number of grazing animals, and there are no large predators. I suppose it’s more renowned for its spectacular landscape, with its isolated rock formations and tall cliffs – which make it easy to imagine that you’re traversing an ancient river bed. It would be a shame to lose such an asset, and I’ve always regarded the encroaching Olkaria plant as a threat to the national park and its unique landscape.

But having learnt about Kenya’s renewable energy potential, and that the majority of the country’s electricity is generated from hydro and geothermal energy, I have become less cynical. The addition of the natural spa, too, is a creative way to exploit the area’s abundance of geothermal springs, and to promote Kenya’s use of the green energy source.

Though you can access the spa from the park’s western gate, next to the Olkaria plants, it’s easiest to come in through the main gate from the Moi South Road. You have to pay park fees to get to the spa anyway, so it’s worth exploring the park a bit first, whether it’s on a bike or in a car. Cycling to the spa is no easy feat though, because the last stretch to Olkaria at the end of the dirt road is a long, steep ascent. At least, if you do choose to cycle, it gives you more time to appreciate the sweeping views of the park, and a relaxing dip in the geothermal pool is a fitting reward. The same can be said for those who choose to wander through the Ol Njorowa Gorge, which is also at the Olkaria end of the park.

The spa itself is located next to one of Olkaria’s large power plants, amidst huge white plumes of steam and lingering whiffs of sulphur. It consists of a large 70 metre long, 40 metre wide and 1.5 metre deep pool with hot, milky-white water. Brine water – a solution of sodium chloride salt and water – is drawn from nearby geothermal wells through pipes at 150 degrees Celsius, before being cooled twice and fed into the pool at 40 degrees.

That’s what usually happens, anyway – when we visited the spa, we were told there was a slight malfunction in the system, and that the water wasn’t as hot and steamy as it should be. It was still quite warm though, and everyone congregated around the main inlet like moths to a flame, where there was a trickle of hot water. The edge of the pool is terraced with three small steps for those who want to wallow in slightly shallower water, and to make it easier to get into the steaming hot water.

The water is allegedly naturally rich in minerals, chief among which is sulphur, and the spa is expected to promote ‘balneotherapy’ – which is the name generally applied to therapy using hot and warm baths in natural mineral-rich water. According to hydrotherapy experts, sitting in the water for just 20 minutes has therapeutic benefits for the central nervous system, and the muscle relaxation it causes is especially good for those with arthritis. Apparently sulphur is also good for the skin.

And the cost of all this? Well, it cost KenGen $286,200 to construct, which equates to approximately Ksh25 million. This includes the main pool, a smaller pool for kids, and an administration block with a reception and large changing rooms with showers. There are also plans to expand the facility in the near future; KenGen want to build a restaurant, a conference centre, exclusive pools and even cottages on the hills surrounding the spa. The electricity company would just be responsible for the running of the pool, and would leave the hospitality side of it to somebody else. The spa is already attracting large groups of both locals and tourists, and these planned additions will undoubtedly increase these numbers.

It isn’t too expensive for visitors either. At the moment the cost for Kenyan citizens is Ksh400, and Ksh1,000 for residents. It’s a bit steeper for non-residents, at Ksh1,800, on top of the $30 to get into Hell’s Gate. It’s a unique experience, though, and definitely worth it after a long cycle ride through the park, or an even longer walk through the gorge.