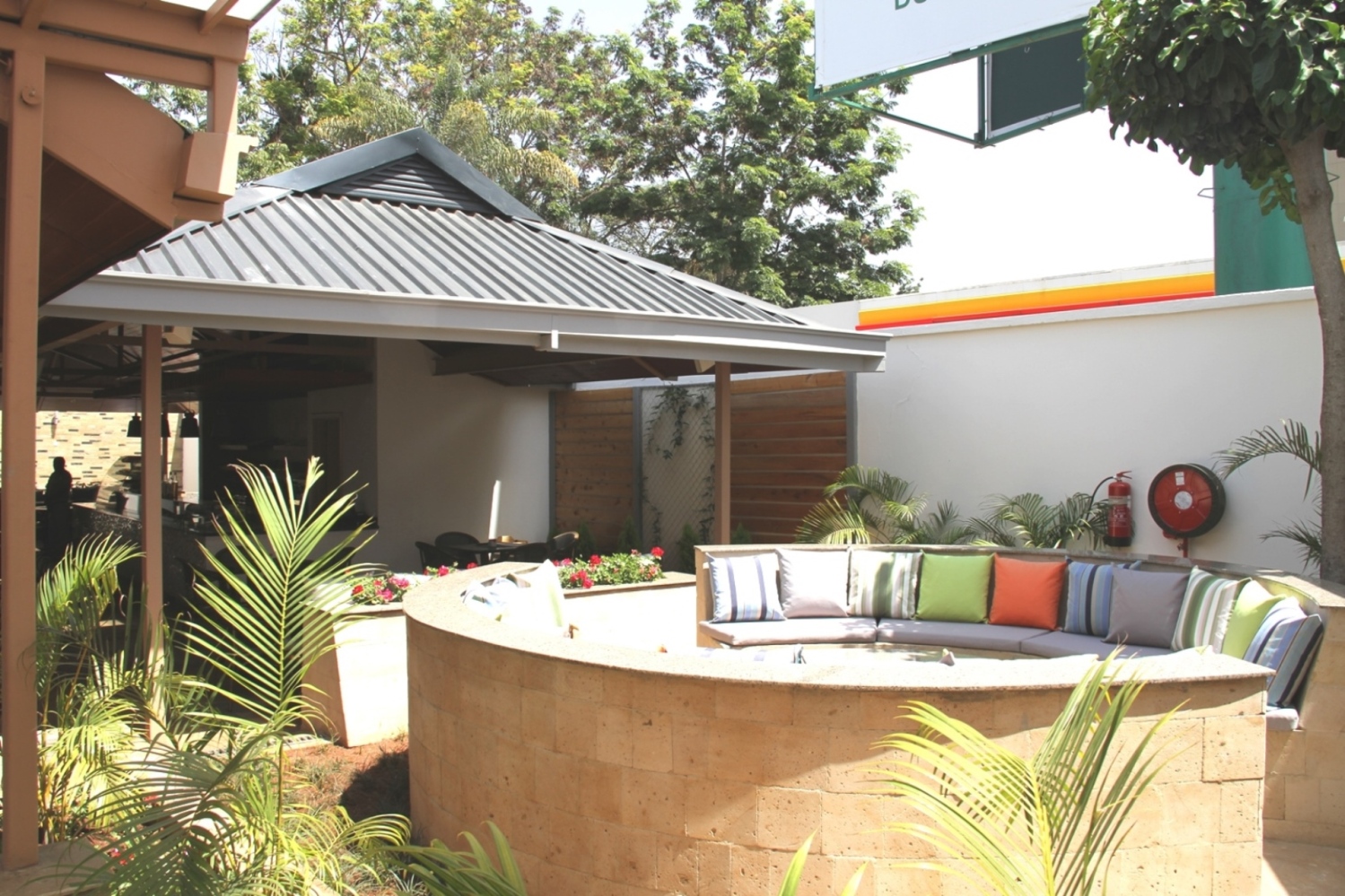 Last Sunday we went for lunch at the old Pizza Garden. It’s now called The Node. It had a soft opening only last November. And it’s very different from the old place.

My Oxford English Dictionary (the best there is!) tells me that, among other mathematical or astronomical kinds of thing, a node is ‘the part of a plant stem from which one or more leaves emerge’. I can see why they chose the fresh name.

‘This is three in one,’ said Nahshon Matheka, the Food and Beverage Manager for both the Jacaranda Hotel and The Node – because The Node is part of the Jacaranda complex in Westlands. It’s just across the road, and there is plenty of parking immediately outside or in the hotel’s car park.

But I was beginning to tell you what Nahshon meant by ‘three in one’. He is a very enthusiastic Food and Beverage Manager, by the way. He has worked in many places – in Ghana, Nigeria and Dubai, as well at as other hotels in Kenya. He doesn’t look old enough to have done all he has done – but he has.

Nahshon was keen to show us round after we had ordered our food. He started where we were sitting – in what he called the Café. Normally, he said, a hostess would greet you as you entered and, if all you wanted was a coffee and a cake, she would find you a place in the Café. If you wanted something more substantial she would escort you to the Garden Restaurant.

But Nahshon became our host – and a very proud one. In the Café he pointed out the two circles of comfy sofas surrounding fireplaces. These will be ideal for group get-togethers, especially when the chilly evenings come again.

We moved over to the Garden Restaurant, where a number of the tables are set out on the grass and are shaded with broad umbrellas. Nahshon told us that the restaurant can seat up to 120. I asked him what sort of people would make up that number. He said that, in the daytime during weekdays, he expected that most would be people from the many surrounding offices. The café and restaurant open at 6.30 in the morning, so it will cater for the increasing number of office workers who drive into town early in order to miss the traffic jams but then have the other and nicer kind of jams on their breakfast toast.

And then he took us up some steps to where especially the evening folk gather. This is the Sap Bar – so the tree image is continued. It is quite spacious, with an inviting long bar. It has two distinct spaces. The more public section has television screens for watching, I assume, the SuperSport football. Around a corner, the more private section has tables and sofas screened off for more comfortable and quieter entertainments.

Without doubt, The Node – especially the Sap Bar – will soon establish its place in the Westlands nightlife. But my wife and I were there to sample Nahshon’s daytime food and beverage offerings. Mindful of the place’s history, I expected that the mainstay of the menu would be pizzas. There are pizzas – many and varied – but they are not the centrepieces. Let me give you some highlights.

For starters, for example, you can have Salmon Gravlax: shaved cucumber and radish, pickled lemons, wasabi (Japanese horseradish) and garlic cream, and garnished with fish crackling. Another one is Salted Pepper Squid: crispy fried squid, lemon curry, mayonnaise, accompanied with baby herbs salad and garnished with sauce verde. So you can see that The Node is a much more sophisticated place than the Pizza Garden used to be.

For the main course, there is a wide and imaginative choice of the usual meats (beef, lamb, pork, chicken and fish), pastas, pizzas or salads. I chose the Grilled Lamb Cutlets, described as ‘French trimmed and thyme marinated’. Succulent they were, and good value at 1,500/-, which is in line, I think, with Nairobi establishments of a similar standard.

My wife, Lut, is a vegetarian; she chose, and was happy with, the Roast Pumpkin and Beets Salad: lettuce, sweet roasted pumpkin, beetroot slices, orange segments, walnuts – and she swapped the goat’s cheese for cherry tomatoes. She suggested to Nahshon that restaurants will need to be more mindful of the increasing number of Vegans.

It was a pity that, being a chocolate lover, I was too satisfied to tackle the Chocolate Attack: with all of chocolate fondant, chocolate cheesecake, chocolate mousse and chocolate ice cream.

So, given its location, its pleasant and relaxed ambiance, its varied offerings, I reckon The Node – this three-in-one place – will do well, by both day and night.