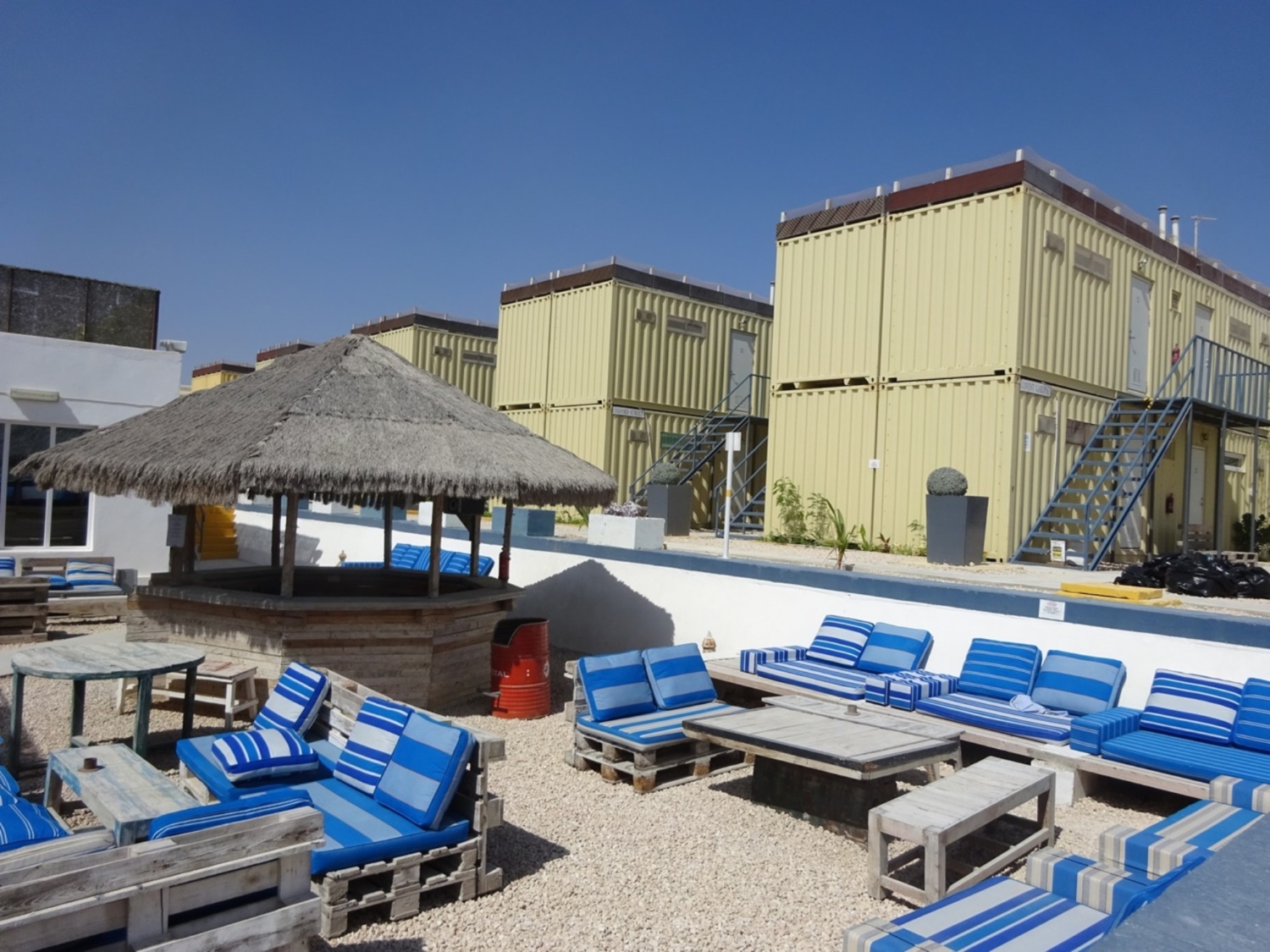 At the hot drinks counter a blonde woman was sniffing cups, one after another. She must have sniffed at more than half a dozen before she found one that had the right smell – or lack of it – and then poured a coffee from the percolator.

At a table across from us an mzungu, rather gaunt except for his bright red baseball cap that never seemed to leave his head, had found a young listener – and he talked non-stop for at least twenty minutes. And for the next three days, whenever I saw him, if he didn’t have a live listener he was speaking to his phone.

I guess if, for weeks on end, you are cooped up in one of the camps within the protected area of Mogadishu airport your behaviour might well drift into the eccentric if not bizarre.

But for us the camp called Chelsea Village was something of a welcome and quite surprising oasis, a relaxed place within the always tense and often frenetic airport, and well sheltered from the hot glare of the Somalia sun.

It’s called a camp, but instead of canvas tents there are steel containers – in the language of the camp’s leaflet, ‘bespoke NatCap 5mm steel accommodation unit.’ There are rows of them, one steel unit on top of another. They are very smart containers, too, with a double bed at one end and a washroom with a hot shower, toilet and basin, at the other. In between there is a wardrobe, workspace, a fridge, and a settee. On the walls there is an air conditioner and a multi-channel TV.

In keeping with the Chelsea name, each avenue between the containers has a London name: like Oxford Street, Regents Street, Carnaby Street and Saville Row. I was allocated number 15 Oxford Street. I guess the entrepreneur who set up this place was a Diaspora Somali from the UK.

Chelsea Village is certainly more upmarket than the other camps I have seen in the secured airport complex or in Kismayo. It has a well-cushioned sunken lounge, a swimming pool, a café and bar, and a well-equipped gym – well that was the judgement of my two colleagues; I kept well away from its torture machines.

The dining room is somewhat ‘hipster’, with tables made as if from old wooden packing cases, with repro chairs – and with substantial and tasty food. It had a small plastic tree with fairy lights, to remind us it was Christmastime.

On the second day we were to be driven to our workshop site outside the airport and a vehicle with security had been hired for the three of us. As I walked towards the vehicle after breakfast I felt rather like Gulliver in Brobdingnag, the land of giants. There were two big mzungus standing by the bullet-proof car, with helmets on their heads, flak jackets across their chests, and tattoos up their brawny arms.

The one in charge, the one touting an AK-47, gave us a briefing. He told us that the drive would be 1.1 kilometres; that we would be led by an unmarked pick-up carrying armed police; that he would stay with us all day – and that he had medical training if we needed it. All very reassuring, of course – and no doubt calculated to justify their price, which was so high I am too embarrassed to tell you.

On the second evening we felt like a drink. But Chelsea’s café and bar had run dry.

‘No problem,’ the barman said, ‘It’s the Kenyan Embassy two plots away. You can get a beer there.’ And so we walked. Yes, within the protected perimeter, you can walk.

‘The Embassy is closed,’ the gatekeeper said. ‘But we were told we could get a drink at the bar.’ ‘Oh yes. Karibu!’

And so we went into the compound, and there out front was the bar. The barman was welcoming; there were customers at the tables – all men – the beer was cold. In such an inhospitable place, this is the friendliest embassy I have ever visited.

On the fourth day and on the way out, there was an amusing incident at the final security check. I have a replacement hip that, like the accommodation units in Chelsea Village, is made of steel. So, though I have removed everything else of metal, the buzzer always goes off as I pass the metal detector machine.

Sure enough the buzzer went off. ‘I have a steel hip,’ I said.

Normally, someone just quickly frisks me and waves me on. This time the frisker beckoned me to the curtained kiosk. He waved his gadget over me and the bell rang at my left hip.

‘Show me!’ he insisted as he tugged at my trouser top, ‘Show me!’

It took me some time to convince him that it would require a tricky operation to do that.